Get me to the Greek 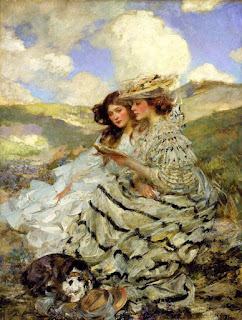 Have you ever wondered why so many Eastern US cities have Greek names, and not just any ol’ Greek names, but those from ancient Greek history? Syracuse, Troy, Ionia, Athens, Ithaca, Sparta, Corinth, Crete, Marathon...it’s because American schools used to teach something called “The Classics.” 18-20th century British and US prep schools and colleges prided themselves on the rigor of these courses comprised of Latin and the accompanying Greco-Roman literature. And everybody was expected to know and understand this common core of knowledge. If you didn’t, you weren’t considered truly educated. That’s why Chautauqua’s CLSC book list was jammed with classics; to expose that chambermaid or blacksmith to Pericles and understand why the battle of Marathon was last bastion against the Barbarian hoards threatening modern Europe’s future. I read the Chautauqua-published text “An Outline History of Greece” by John H. Vincent and James R. Joy (1888) with intense pleasure…so much so, that I might take another turn at it when I’m not under the gun to wrap up my required reading!


In our country’s early history, education wasn’t necessarily learning to express yourself (in fact, that was rather frowned on), but existed to inscribe the student’s tabula rasa with the finest and best the world had ever produced. Again, that would be the Greeks. Their unmatched valor as warriors, their astuteness as statesmen, their democratic ideals, their brilliance in drama, poetry, the arts, mathematics, literature—essentially, everything started with the Greeks! Such studies were the common coin of the higher education and the architecture of our American social order. Western Civilization, boiled down, was essentially a shanghaied cultural history. And we stole it from the Greeks. This compact book is an idyllic ode to Western Civilization, written in the lyric, exultant voice of one who nearly worships anything that hails from Attic shores.
See, you don’t probably realize that “Attica” is another word for Greece, do you? Exactly! That’s how distant we are from our rote-based education’s early Spartan sternness (another wasted reference for some, alas). How far we’ve come from the naïve and quaint elders who optimistically named villages for Ancient Greece’s centers of heroism or learning. How far we’ve come from the practice of memorizing huge swathes of the Odyssey or Iliad! The only Homer today’s students know is an idiotic, donut-eating cartoon. If I say “Trojan” what do you think of? Stalwart soldiers? Probably not. See? The modern schoolkid lolls in the lap of indolence, wafting the palm leaf of stupor, languishing away on the modern isle of the lotus-eaters (another reference that probably sailed over the average contemporary reader’s head).
I’m glad I had what could now be called a “classical education” in the days when the expectation was to trash the old and fling open the doors of the Academy to modern voices. Throwing over the traces of tradition and diversifying the canon, our high school was behind the curve and just on the cusp of the Woodstock-era sea change. Our VERY old-school principal insisted on a classical education—not on his watch would Western Civilization decline! When he retired, the deluge. While I never had the school-age joys of deeply exploring “the Classics,” my conservative Christian college (trying to update their curriculum) blurred their version into something called “Humanities,” roping in art, archeology, music, and architecture with literature. I even wrote my entrance exam paper on why the classics are essential! Can you even IMAGINE anyone saying that today?


You’ll find the stories of revolt, treachery, bravery, slavery, disgrace and triumph here—all written in that wonderfully fluid, purple prose I adore so. No one here is in trouble; they’re in “deadly peril.” Here’s a perfect example of why I wish I were swinging in a hammock, all alone, reading this, rather than hunched over a limp sandwich, nibbling furtively, as I fend off office clamor and try to concentrate. You can’t read a sentence like this without wanting to read it aloud, in ringing tones: “The firebrands smoldered for another decade before they broke out into the conflagration in which the last remnant of Athenian supremacy was consumed.” I mean, really! Today’s digitized and distracted students would never get the end of that sentence without falling asleep or checking Instagram!


Okay, one more example I just can’t bear not to share: “To the possession of vast wealth this man added a readiness of wit, a fertility of invention, a power of complaisance, which invested his manner, when he wished to please, with a singular charm. He was utterly selfish and unscrupulous; and, if we are to believe the stories told of him, his youthful career was one of gilded sensuality and of barbarous ruffianism, hidden under a veil of superficial refinement.” Who is this amazing character? Alcibiades, if you want to know; BTW, a name any Victorian schoolchild would be familiar with!


Read any famous Victorian novel, like Little Women, and you’ll find a dozen references to classic Greek culture, mythology or practice. A group of like-minded young men might style themselves as the “Sacred Band”-that’s a nod to the famed Theban army whose grit and courage was unparalleled in their time. Ever heard of them? I didn’t think so. Know what the Gordian Knot is? Is the glorious defeat of the Spartan 300 a violent video game or CGI extravaganza to you? Why did many Victorian-era libraries and literary circles call themselves Lyceum? Why is a closemouthed person termed “laconic”? Ancient Sparta was also known as Laconia, and were taught to speak in “short, pithy sentences.” Surprised? Me, too. Yeah, you can look this stuff up on Wiki, but when you were a pupil in any respectable school in the 1800s, you were TAUGHT it. Incredible, right? And that ship has sailed, I’m sure, never to approach these shores again. Today’s common cultural references—zombies. ‘Nuf said. What’s the score? These days:  Barbarians 1, Western Civ, 0.


Leonidas, the Spartan 300’s heroic leader, was told that the Persian enemy was so numerous, that the flight of their many arrows would darken the sun. He replied, “Then we shall fight in the shade.” If your heart quickens a bit when you read that, and you wish you had a noble cause in which to fight, I suspect you’re a closet Romantic (like me) and might just need to read this book!


Bonus: I am always delighted when I find little slips of newspaper tucked into these vintage volumes…this one hid a carefully clipped CLSC notice (see image below--it's sitting on the little book that we're discussing! See the COOL CLSC emblem on the cover! Sweet, right?). The book’s diligent owner, Mrs. Nellie Jordan (whose penciled name graces the flyleaf of this wee book), saved a clipping of the announcement of her CLSC meeting (I only wish I had a time machine!). It reads as follows:  Clio CLC will meet with Mrs. Nellie Jordan Friday evening Nov. 30, 1888, at seven o’clock; the following program will be observed:


1.      Roll Call. Names of authors mention in the required readings.


3.      Last half of questions on “Outline History” in November Chau.


6.      Reading selections from Charity by Cowper, Rev S.H. Woodrow. To be followed by debate: “Is relief giving the cause of pauperism.” 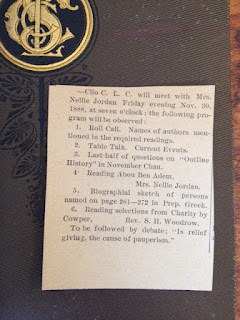 “Study to show thyself approved, a workman that needeth not be ashamed…” 2 Timothy 2:15
Posted by Karen at 1:09 PM