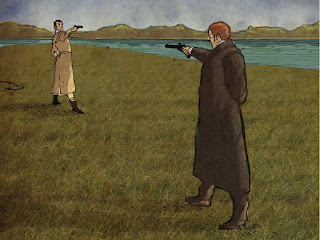 Philosophers are funny people. They live in a sort of literary Spy Vs. Spy world—sniping at each other from behind the covers of their latest works. This Cold War of words is a longstanding tradition—literary critics since the days of Alexander Pope routinely took potshots at each other in the daily papers, each playing “Can You Top This” with a vitriol-dipped pen.


Last post, I examined (rather gingerly) James B. Walker’s 1889 The Philosophy of the Plan of Salvation. Bluntly put, while I admired the consistent logic of the work, I had no hope that it was responsible for converting a single soul from a godless state to one of grace. I feel very much the same way about that book’s 21-Century counterpart (at least, one of them) Ravi Zacharias’ pocket dynamo, The End of Reason. Ravi Zacharias is the premier Christian apologist of the age--he routinely hosts Q&A sessions at Harvard, Princeton, Yale, and around the world. They're wildly popular and the Q&A line typically extends out the door.
This compact, very focused book is a page-by-page destruction of one of the most popular, depressing atheistic credos: Letter to a Christian Nation by Sam Harris. Harris pulls out all the stops, offering his own hybrid of yellow journalism arguments and time-tested questions (i.e. "if God is a god of love, why does He permit pain?").  Ravi calls him on every subjective swerve from pure logic or reason as he dismantles Harris' work.


Honestly, Ravi's title says it all—he contends (and I’m with him) that our century, and particularly our country and this generation is so far removed from the classic debate formulas as to reduce the arguments for and against God’s existence to the subjective. There’s nothing reasonable about it.


Ravi’s brilliant logic echoes his 19th century predecessor in several key arguments, the crucial one perhaps being that something cannot come from nothing. Any flimsy arguments to the contrary are crushed under the juggernaut of Zacharias’ relentless conclusions. Ravi dismantles Harris’ feeble claims about Eastern religion with (it seemed to me) particular zeal, probably because he was RAISED on them and has studied them and actually knows what they mean when they say things—something Harris is really just speculating on. It is at this point that Ravi, normally very polite, inches towards sarcasm. He’s clearly disgusted with someone who doesn’t flinch at using illustrations and examples he obviously doesn’t fully understand.


Ravi states his case and attacks the hidden angry substrate of Harris’ work, blow-by-blow. He never swerves as he ruthlessly labels Harris’ examples what they are, even calling attention to those Ravi fingers as crass and vulgar, implying that Harris is not only poorly prepared but a boor and a shadow-boxer.


I suppose if my children had been led down the primrose path of ugly atheism by Sam Harris’s blockbuster, this book might be the perfect stocking stuffer. Alas, as Ravi acknowledges, atheism is an emotional reaction and a willful rejection. It’s not based on a one-two punch of science and logic—it’s a defiant stance, a raised fist to a God whose nature as Creator requires a response.


“Science and religion do not have to be enemies,” says Ravi, “they are facets of one truth, whose source is God.” For me, that sums it up neatly. I’ll leave the pistols-at-dawn crowd to argue over the fine points while I watch the sunrise in the background and bless the Lord who created it all. 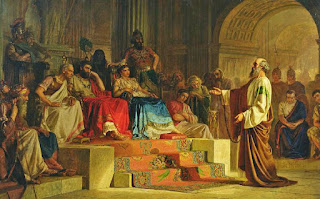 “That to the heighth of this great argument I may assert eternal providence, And justify the ways of God to men…” John Milton, Paradise Lost


“Mansplaining” reaches dizzying height of hubris with poet John Milton, who figured several walloping stanzas of his epic poetry should sufficiently “justify the ways of God to men.” Really? The very idea of trying to justify God’s ways—as if we could ever truly figure out the Creator of the universe with our puny human brains—is borderline nuts. Nevertheless, Milton dove in headfirst and was lauded for his efforts. He had a 19th century apprentice in James B. Walker, D.D., author of “The Philosophy of the Plan of Salvation” (1889)—the CLSC book under discussion here. Walker’s goal: explain God’s plan in a way that would knock the legs out from under his era’s highly literate critics of Christianity. That first generation of Chautauqua logisticians must have wrestled mightily with this assigned text; I know I did.


Walker attempts to lay out, in sequential logic, exactly what God had in mind when He constructed His plan of salvation. He tackles his subject with supreme confidence, building arguments and presenting conclusions with literary flourishes worthy of the courtroom “…it follows, therefore, legitimately and conclusively…” (pg 118). While I admire the Victorian philosopher’s zeal for corralling dogma and doctrine (not to mention the Old Testament’s ferocious bloodletting) into fitted-and-bolted frameworks, I struggle with its inevitable reverse engineering aspects.


Starting with his era’s elaborate “scientific” anthropology, for example, he posits that God orchestrated the grand scheme of holiness, priesthood, sacrifice, and temple worship because the ancient Jews could best understand God via object lessons and displays of power (i.e. Mt. Sinai, parting of the Red Sea, et al.). He called them “preparatory steps that led...to the light” (pg 116). Tribal Judaism, in his theory, wobbles along on religious training wheels until evolved enough to understand the “perfect system of religion.” (pg 109). Enter Jesus. We don’t require these sorts of spiritual pyrotechnics now, because we’ve culturally progressed. No miracles needed, thanks. We’ve got enough intellectual prowess in the new dispensation.


His tightly woven arguments do force conclusions—but only if the reader accepts certain baseline truths and cares about cohesive, rational deductions. “The preceding premises being established, the following conclusions result...” (pg 139) Alas, his cherished conventions of ordered logic are nowhere to be found in today’s highly subjective, post-Truth society. His arguments may have been compelling in the 19th c. (“..and so you see”, “…you must admit,” etc.), but today’s skim-and-scan readers dismiss logical progression as belonging to a stodgy egghead crowd. Logic isn’t the final authority—one’s feelings are. As a result, in our day, the antiquated structure of formal logic is lumbering inexorably towards the sheer cliff of “who cares?” Walker is essentially preaching to the choir and writing in a sealed chamber—each logical argument is based on the precarious belief that there’s a one-size-fits-all human behavior pattern. Ergo, God created a system of religion to maximize its effectiveness based on that predictable and in fact, God-designed pattern. It’s all a fine-tuned, inevitable cosmic cause-and-effect where God Himself is logically constrained by His own decrees and creation.


Most cornered atheists would probably admit they’ve never taken the time to construct experiential proof for their belief system. Their spiritually null state often stems from shattered illusions, painful family trauma and/or a hedonistic discarded of the repressions that represent God. It’s a “Santa suit in the basement” moment for many. Once setting forth on a godless sea, no amount of rational discourse is going to turn that ship around.


The problem isn’t a lack of logically presented information—Walker’s stance notwithstanding—it’s spiritual deafness. 1 Corinthians 2:14 clearly states: “The person without the Spirit does not accept the things that come from the Spirit of God but considers them foolishness, and cannot understand them because they are discerned only through the Spirit.”


Convincing someone they need a Savior via higher criticism, as the apostle Paul discovered, can be disappointing work. After listening to Paul’s irrefutable logic, King Herod Agrippa witheringly remarked, “You almost persuade me, Paul.” Another rationalist listener, Judean governor Festus, reacted less calmly. “You are out of your mind, Paul!" he shouted. "Your great learning is driving you insane." (Acts 26:24)


Let’s see if the 21st century rationalist approach of Ravi Zacharias, the foremost Christian apologetic of the age, fares better. I’ll be reviewing his response to the foremost contemporary atheistic text in my next post.


“Then Agrippa said unto Paul, Almost thou persuadest me to be a Christian.” Acts 26:28
Posted by Karen at 1:17 PM No comments: