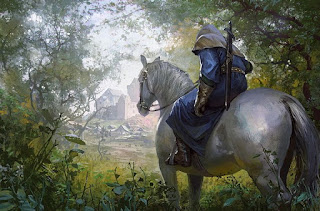 Few books I read in junior high affected me as deeply as “A Man Without a Country” by Edward Everett Hale. You remember it---a fiery Revolutionary War traitor was banned forever from setting foot on American soil, eventually constructing and worshipping at a virtual shrine to the United States. This manly tear-jerker isn’t Hale’s only “brash man lives to regret his words/actions” tale. “In His Name” is an 1873 Christmas novel about Jean Waldo, a Crusades-era merchant-prince in Lyons, France (Richard the Lion Heart is mentioned, of course).

Waldo’s daughter, Felice, the darling of all who meet her, is accidentally poisoned and the race is on! This surprising page-turner is a sort of 19th-century four-legged “The Great Race” with a surprising spiritual aspect and a history lesson neatly tucked into its beautifully illustrated pages.

It’s like this: Jean Waldo shares a last name with Pierre Waldo, who (who knew? I certainly didn’t!!) was one of the first to translate the Bible into French so the common folk could read the Scriptures on their own. This spiritual movement, called the Waldensians, didn’t go down too well with the reigning French bishops (even though Pope Innocent gave this endeavor the okay), so they excommunicated Pierre Waldo and his disciples. Since Jean Waldo’s theme is “I take care of myself. My business is not his and his is not mine”, he’s kind of up a creek when he realizes he desperately DOES need someone’s help.


And can you guess whose help he needs?? You’re close. No, not Pierre, but his equally infamous and banned for life from Lyons translator-priest, Father John of Luigo. It’s Father John who possesses the antidote/cure that’s kept in a Crusade-rescued Saracen vial that resides in Father John’s secret laboratory. Right??? But can the Arabian-steed mounted couriers (who meet with all sorts of maddening delays and challenges) make the impossible trek to the Alpine foothills in Italy to fetch back Father John in time to save Felice?

Simple? Maybe. Juvenile? By modern criteria, probably. But I learned more about the covert and suppressed translation of the Scriptures from this lively pre-Google saga than I’ve ever learned before. I’d never even HEARD of Pierre Waldo! As in many Victorian-era novels, Hale doesn’t hesitate to throw in some pretty grim details (Felice’s poison reaction is pretty graphic) and the specter of death looms near. This book reminds me of Robert Louis Stevenson’s boy-centric adventure novels with the wonderful etching illustrations, the relentless, exciting action, the page-turning suspense and the vividly sketched characters. The songs and poetry interruptions were probably skipped or ignored by the original audience (I certainly tried not to, but verse 10 of a medieval ditty gets a bit wearing).

But, this is much more than a history lesson or a rip-roaring chase—at its core, it’s a celebration of the long, rich history of Christian charity, forgotten heroes of the faith, and true Christ-like living. The couriers and other helpers are recruited out of their initial reluctance when the one pleading for help makes the mystic sign of the Maltese cross in the air or draws it on a door and once the compelling words “In His Name” are evoked, covert Christians immediately spring into action. Like the man without a country, Jean Waldo, a man without a god, is forced to realize his self-created world has a poverty he never suspected until his narrow, selfish world collided with Truth.