One of the major justifications for the Chautauqua CLSC scheme was to allow non-collegiate types to live, move, and have their being in an extremely restrictive, stultifying-ly caste-bound Victorian society. The reasoning went thusly: if we can provide a sort of Cliff’s Notes version of a college education—but one that resulted from actual study and earnest work—the student would be able to stand around at a gathering, say, of actual college folks and hold their own in a conversation. Rather than blink stupidly and yawp when Joe College whipped out the latest on Einstein’s theory, our CLSC student would be able to respond with intelligence, thus, hopefully, gain status, reflected glory, and, perhaps, some opportunities heretofore closed to them. The gates of respectability swing wide to welcome the cultured person in that era. You might assume that up-by-ones-bootstraps mentality has disappeared in this Googly age of handheld knowledge, an era when even the dullest high-schooler expects, nay, fights for his right to party with the frat boys at the college of their choice. So, education, not such a big deal these days (check the SAT scores…you’ll see a sad bell curve these days), right? Not so fast, buddy.
My 21st century counterpart to 1882’s Studies in the Stars, Astrophysics for People in a Hurry by Neil deGrasse Tyson, tells me otherwise. This highly entertaining slim little volume (it vies for cute points with my pocket pal Studies) has page after page of bite-sized info-snippets, marketed and designed for the contemporary reader’s well-documented flitting and fitful attention span. It’s a sort of highbrow Cliff Notes, designed to be enjoyed while swaying on the subway or tucked in a Christmas stocking, a cerebral box of Godiva chocolates.
"In this slim volume,” Tyson cheerfully declares in his introduction, “you will earn a foundational fluency in all the major ideas and discoveries that drive our modern understanding of the universe. If I’ve succeeded, you’ll be culturally conversant in my field of expertise, and you just may be hungry for more.” (p12). That sentiment is eerily similar to ones made by Chautauqua founder, Dr. Vincent, as he advocated that familiarity with the great themes of world literature, a good grasp of history's march, the rudiments of fine art and music, the ability to discuss the wonders of science, do some algebra, and speak at least one foreign language were the keys that unlocked opportunity for the left-behind Victorian worker population.
I genuinely enjoyed Tyson's book and, like many liberal arts majors, find it absolutely impossible not to draw intriguing parallels between scientific phenomena and everyday life on earth. How can you NOT see the link between how lopsided orbits reveal an invisible star’s existence and the way your crazy co-worker behaves in certain trigger situations? And, I’ll bet I’m not the only Christian who reads spiritual truth in the phrase: “When something glows from being heated, it emits light in all parts of the spectrum, but will always peak somewhere.” (pg 50) Isn’t that just like our daily devotional encounters with Jesus? Just coming in contact with Him will produce a glow, but, depending on our receptors and our personal bent, it will definitely peak somewhere specific. This book is FULL of juicy little object lessons like that. Ooh, ooh, or this one: Describing Einstein’s mathematical placeholder for calculating dark energy Omega (Ω), Tyson says, “Nobody had seen the dominating presence of cosmic dark energy, nor had anybody imagined it as the great reconciler of differences.” (pg 110). Well, gee, that reminds this believer of a certain Alpha and Omega who is, indeed, the greatest reconciler.
The coolest part to me, hands down, is Tyson’s candid, nearly continual admission that we, as a race of observant, intelligent, curious beings, have no idea what the heck is going on 90% of the time. Even if you're a Brainiac.This book has so many good-humored admissions of ignorance I lost track. “Their origin continues to be a mystery…”, “…we are essentially clueless.”, “…what remains the longest-standing unsolved mystery in astrophysics…”, “…whose nature we have yet to divine…”, and my favorite: “Scientists are generally uncomfortable whenever we must base our calculations on concepts we don’t understand, but we’ll do it if we have to. And dark matter is not our first rodeo.” He gives an admiring bow to the 19th century, saying “Also in the nineteenth century, we observed stars, obtained their spectra, and classified them long before the 20th-centure introduction of quantum physics.” I really like this guy.


Scripture streaks through Mr. Tyson’s wonderfully clear prose like a random, brilliant comet. Many of Tyson’s chapter heads are subtly or blatantly religious: The Greatest Story Ever Told, Let There Be Light, On Earth as in the Heavens; “In the beginning…” (his kickoff sentence in chapter one…either an across-the-aisle handshake or a territory grab of the Genesis story). Inter-textual references ditto. He even quotes Isaiah 40:4, explaining that a certain gravitational phenomenon sounds “...almost Biblical, in preparing the way for the Lord (his capitalization, not mine).

So, basically, if you’re not biblically literate, you won’t get many of Tyson’s clever, well-written Scriptural allusions. And Mr. Tyson, I smell a church upbringing here; it’s tough to casually sling around biblical verbiage if you’ve never been exposed to it. Not to mention, you can’t appreciate the manifold manipulations of that language if you’ve been sheltered (as so many have in this culturally confused and bereft generation) from the base concepts and Biblical record of the Judaeo-Christian faith.

Tyson enthusiastically lauds Isaac Newton (a devout believer in God) as the brain of the millennium; Einstein comes in second. Now, I happen to know that Newton never found anything that shook his faith, in fact, his discoveries only solidified it, from alpha to omega. “Every few years, lab scientists devise ever more precise experiments to test the theory, (Einstein’s), only to further extend the envelope of the theory’s accuracy.”(pg 96). Sounds to me like Tyson is hinting, sometimes, the truth is Truth. It’s indisputable, even when you grab it by the ears and shake it around. Which begs the question: if Newtonian concepts are the ABC of astrophysics, and Newton was right about gravity, couldn't he be right about the Prime Mover, too? Stands to reason. Especially if, as Tyson repeatedly admits, we're pretty cosmically clueless.

Tyson quotes a ditty by Einstein:
Look unto the stars to teach us
How the master’s thoughts can reach us
Each one follows Newton’s math
Silently along the path..”
Newton would have capitalized the M and said the stars trace a path laid out for them before the world began by the One who called them out, all by name.

"Those who are wise shall shine like the brightness of the firmament; and those who turn many to righteousness like the stars forever and ever." Daniel 12:3
Posted by Karen at 5:02 PM No comments:

Dancing with the stars 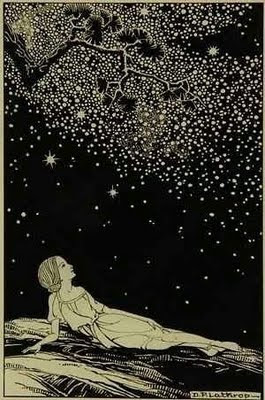 "The universe is God's name writ large. Thought goes up the shining suns as golden stairs and reads the consecutive syllables, all might, and wisdom, and beauty, and, if the heart be fine enough and pure enough, it also reads everywhere the mystic name of love. The stars speak the oldest language. The morning stars sing together...How can God write his name more widely or plainly, hold the open page before all men more constantly or how can we read the message in more impressive language? Some have asked whether the myriads of distant worlds were inhabited. It is not known. Perhaps it is a sufficient cause of their being that they should testify so effectually of God to every man, whether savage or sage, in all ages of time. Let us learn to read the hieroglyphics, and then often turn to the blazonry of the page." (Studies in the Stars, Henry W. Warren)

Someone asked me why I'm reading 19th century books for my year of Chautauqua Literary & Science Circle--see above. I’m not sure I can explain the wellspring of joy that rises up in me when I sashay through the introductory chapter of my 1883 CLSC text Studies in the Stars, by Henry White Warren, DD. Unlike today’s jargon-rich, slightly arch introductory science texts that sometimes seem to derive more from Seinfeld than Einstein, this teeny Victorian “Chautauqua Text Book” reverently, joyfully, and unapologetically declares that the heavens declare the glory of God and are, indeed, His handiwork. And in case you don't get it at first glance, each chapter opens or concludes with Scripture celebrating the mystery and marvel of the starry hosts who move at God’s command.

There’s a nasty rumor around that the Victorians were fussy, uptight, narrow types, but when you do a little digging beyond the stereotypes, you find wide-eyed enthusiasts who fairly bristle with curiosity, zest for life, and an unquenchable appreciation for their surroundings. You might expect era-driven conflict between Science and God—nothing could be farther from the truth, because, it’s all about the Truth for Victorians. Since God created the world and everything in it, from microcosm to galaxy, exploration and discovery only lead you closer to your Maker.

This pocket-sized text assumes you’re studying to gain knowledge, not taking a stroll through the starry skies for mere entertainment. Planetary characteristics, meteoric systems, star-to-star distances, discussions of how light years were discovered (it involves the tides and gravity—no kidding!!)—each brief chapter is jammed with information, but it’s all predicated on the foundation of God as Creator. There’s no debate; it’s a settled fact. To readers worried about exploding novas just discussed, William soothingly says: “We are not living under a government of chance, but under that of an Almighty Father, who upholdth all things by the word of His power, and no world can come to ruin till He sees that it is best.” Whew!

Reading this tattered little book (obviously well-worn from functioning as some 19th c. Chautauquan's iPhone) has given me a deep sense of appreciation for Chautauqua’s educational outreach and wide-ranging scope. But more than that, it offers the 21st century reader an odd sensation of navigating a completely harmonic cosmos, a place where the poetic and the scientific embrace in a waltz of surprising lyricism. Orbits and arcs, parabolas that loop and return, wheeling asteroids that follow invisible hierarchies—here, we dance with the stars.

When I turned over the book's final, slightly brittle leaf, two things lingered in my befuddled mind. One: I am incredibly stupid about astronomy--enthralled, sadly uneducated, and totally embarrassed. Two: I'm stunned at the sheer number of complicated, often obtuse factoids the reader was expected to memorize. Who cares about the weight of Mercury? Why cudgel your brain about the connection of gravity to light years? Because Chautauqua's founders believed knowing such things and being able to speak the language of the mind opens doors to a higher level of existence. You are no longer a low-browed barbarian, squinting fearfully at an eclipse. You are an educated child of the One who orchestrated this brilliant, celestial waltz.  In Warren's words..."we pass innumerable evidences of that motion that makes the heavens alive."

"When I consider Your heavens, the work of Your fingers, the moon and the stars, which You have ordained, what is man that You are mindful of him?" Psalm 8:3-4
Posted by Karen at 5:27 PM No comments: