Recess at the school of calamity 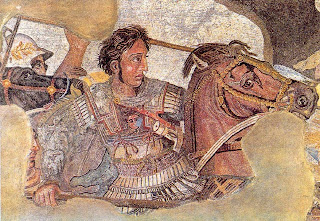 
I’m not sure if anyone else out there wonders about Bible stories like me, but when I read that King David fled Jerusalem when he heard his vain, traitorous son Absalom was heading to town with a huge army, I thought “what a coward!” It’s only after I read The Histories of Cyrus the Great and Alexander the Great by Jacob Abbot (1881) as part of my CLSC year that I understood David’s actions weren’t cowardice but a shepherd-king’s heart for his people.


It took this 19th century book to instruct me in the art of war by way of two of history’s most renowned conquerors. Their temperaments differed, but both shared what Abbott calls “a mysterious and almost unbounded ascendency over all within their influence.”


Abbott has a remarkable facility for making grand statements like this—he clearly adores both his subjects; Cyrus and Alexander have reached through what I’m sure he would call “the mists of time” to touch his imagination and supply his pen with flourishes and fire.


The key to their flaming successes, Abbott says, is that the character of these men required them to act as they did: “He (Alexander) lived, in fact, in an age when great personal and mental powers had scarcely any other field for their exercise then this...” (“this” being world conquest, of course) "He entered upon his career with great ardor and the position in which he was placed gave him the opportunity to act in it with prodigious effect.” (pg 14, Alexander the Great).


So, (see what I mean?) to return to David’s seemingly chicken-hearted abandonment of Jerusalem, pgs. 69-70 in the Alexander portion of this chubby tome inform us of the horrors of sacking a city, detailed with so much delicacy that the author’s literary aversion to spelling it out makes it somehow even worse:


“While the besieged do thus surrender (immediately), they save themselves a vast amount of suffering, for the carrying of a city by assault is perhaps the most horrible scene which the passions and crimes of men ever offer to the view of heaven. It is horrible, because the soldiers, exasperated to fury by the resistance which they meet with and by the awful malignity of the passions always excited in the hour of battle…Soldiers, under such circumstances, can not be restrained, and no imagination can conceive the horrors of the sacking of a city, carried by assault, after a protracted siege. Tigers do not spring upon their prey with greater ferocity than man springs, under such circumstances, to the perpetration of every possible cruelty upon his fellow man. …the maddened and victorious assaulters suddenly burst into the sacred scenes of domestic peace, and seclusion, and love—the very worst of men, filled with the worst of passion, stimulated by the resistance they have encountered and licensed by their victory to give all their passions the fullest and most unrestricted gratification. To plunder, burn, destroy and kill are the lighter and more harmless of the crimes they perpetrate.”


Therefore, I have learned to admire David’s wisdom in taking Absalom’s “target” (himself) out of the city and not arousing the pent-up fury of his betrayer's men. Sorry for the inadvertent character assassination, David!


Alexander seems to be Abbott’s favorite—Cyrus had a great start as a perfectly charming, smart little fellow in the Persian court, but he earned Abbott’s disgust by becoming a heartless dictator in the “Oriental style” –lavish, luxurious, and cruel: “From being an artless and generous-minded child, he had become a calculating, ambitious and aspiring man, and he was preparing to take his part in the great public contests and struggles of the day with the same eagerness for self-aggrandizement and the same unconcern for the welfare and happiness of others, which always characterizes the spirit of ambition and love of power.” (pg 124—Cyrus).


Interestingly (at least to me!) is the author’s Cyrus tale onramp. Abbott avers that everything we know about Cyrus comes from two sources, both of whom are somewhat suspect—one wrote entertainment for ancient Grecian theater-goers a court and the other was a military historian, known for adding a bit of hyperbolic flair to his works from time to time. Abbott states: “It is now far more important for us to know what the story is which has for eighteen-hundred years been read and listened to by every generation of men, than what the actual events were in which the tale thus told had its origin.” (pg 35).  How post-modern is that?


Remember King Croesus, the richest king alive? He became a pet captive of Cyrus at some point; honored for his kingdom even though sidelined by history. We’ll give him the final word from the perspective of the conquered: “I ought to apologize,” said he, “for presuming to offer any counsel, captive as I am; but I have derived, in the school of calamity and misfortune in which I have been taught, some advantages for leaning wisdom which you have never enjoyed.” (pg 277). In Abbott’s book, we’re treated to a balanced view of the pros and cons of world domination and we see that there are some things you just can’t learn from the back of a charging warhorse.


Abbott’s lively biographies of two ancient dominating rulers has the distinct whisper of Christian ethics throughout—that the conquered have a dignity and worth never respected or acknowledged by any but his readers, perhaps. We can admire Alexander and Cyrus, as Abbott clearly does, but we see they are as much a part of the past as any other man on earth; only kept alive by those who read their exploits.


Cue Shelley’s Ozymandias:
I met a traveller from an antique land,
Who said—“Two vast and trunkless legs of stone
Stand in the desert. . . . Near them, on the sand,
Half sunk a shattered visage lies, whose frown,
And wrinkled lip, and sneer of cold command,
Tell that its sculptor well those passions read
Which yet survive, stamped on these lifeless things,
The hand that mocked them, and the heart that fed;
And on the pedestal, these words appear:
My name is Ozymandias, King of Kings;
Look on my Works, ye Mighty, and despair!
Nothing beside remains. Round the decay
Of that colossal Wreck, boundless and bare
The lone and level sands stretch far away.


All flesh is like grass and all its glory like the flowers of the field; the grass withers and the flowers fall, but the word of the Lord stands forever.” I Peter 1:24
Posted by Karen at 8:15 AM 2 comments:

The enervating grasp of vulgarity 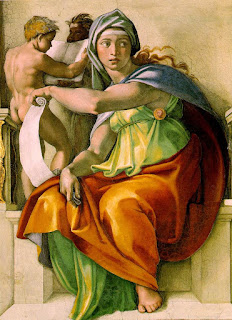 “If I want your opinion, I’ll give it to you” seems to be the underlying principle of the doorstop-weight tome 1881 A Short History of Art by Julie B. De Forest. Ms. De Forest’s credentials are actually never introduced, but her terse judgements (and dismissals) of several schools and regional species of art are delivered with a crisp, no-nonsense tone that leaves no room for discussion. I kind of like it and it’s pretty interesting to see just how far we’ve come as a culture from this sort of super-authoritative approach to teaching.


I could fill pages (she certainly did!) with her epigrammatic condemnations—here are a few characteristic pronouncements:


“Indeed, we may detect even in sculpture the incipient signs of a decaying empire, which in less than fifty years crumbles to pieces.” (p 34)


“Whether art in Asia Minor would have developed any originality of not, it is difficult to say; for, when Greek colonies established themselves there, Greek ideas extinguished whatever life there may have been in the indigenous art of the country.” (p44)


“Above all, Greek architecture was an organic whole, and not an amalgamation of borrowed elements. All its forms were simple and easily understood, and appealed, therefor, not only to the man born and bred a Greek in the days of Pericles, but to all nations and all time.” (p 61)


“The oriental love of splendor and of symbolism was clearly shown and fully gratified by intricate ceremonies, gorgeous vestments, and beautiful decorative details.” (p121)


“We have treated Byzantine art as a whole, because there is so little variety about it, that it is not worth while to return to it.” (p128)


“The barbarism of the North, from the earliest dawn of history, form a ‘dim background to the warmth and light of the Mediterranean coast.’ It was on this far-off horizon that the mist gathered, and the clouds thickened, unperceived. The Romans sank deeper and deeper into the enervating grasp of luxury, and when the storm burst over their heads they were helpless before it.” (p135)


Oh, and let’s not forget this one: “If we fail today to see the innermost hidden meaning in every detail (of Gothic Architecture), we are unconsciously impressed by the faithful and lavish completeness of the whole, as we can never be impressed by the wise economy of later productions of ecclesiastical architecture.” (p159)


There are gems like this on every page and what it tells me of the 19th century is that experts believed in the totality of their judgments and that there must have been an awful lot of journalistic spats conducted over these Jovian statements, particularly as they came from a woman.


Art here is reduced to a science, as were so many other academic disciples in this era—formulae and detailed examination of cause-and-effect are de riguer and there’s a deep distrust and dislike for emotionalism. The author’s curled lip and the rolled eye surface when reviewing florid forms and over-emoting sculptures (she’s not a fan of Michelangelo AT ALL…too much DRAMA). “Human nature,” she declares, “cannot long endure that finer air which blows on the summits of idealism, and soon longs again for the thicker atmosphere of earthly lowlands.” (p200) This to explain the fall of the high renaissance in Italy, of all things.


There’s a fine mist of withering, barely disguised scorn for artistic emotional outbursts whether in marble, paint or timber; they’re pegged “exaggerated sentiment, violent action, and mannerism…they (Da Vinci wannabees) sought to create ideals, but only succeeded in producing far-fetched effects. They had no thoughts to express; and their soulless forms are mere mannerisms, that are neither attractive nor interesting.” (p213) "Soulless" is her highest insult, reserved for artists who fail to rise to her often-baffling criteria.


Her overt disgust for these talentless hacks is balanced by a delicate but distinct fawning rapture over the perplexing dignity of religious figures in famed works. Our author breathes a dainty sigh of relief when noting how Saint Sebastian, bristling with arrows, meekly lifts his curly head without a grimace or furrow to mar his beauty in one Renaissance depiction. Restraint, she indicates repeatedly, is the hallmark of a truly cultured artistic expression. Our author finds the freedom that our modern culture lionizes crude, disturbing, and vulgar.


The coolest thing I found in these pages (which are jam-packed with etched copies of many of the works she covers as such a violent clip) was a snipped chart from an 1880 Chautauquan newspaper. This tattered scrap details the Chautauqua Literary and Science Circle Class of 1882 Third Year Studies, and on it the previous owner of this book penciled faint Xs on those books he/she’d already tackled: Church History by Dr. Hurst; The Tongue of Fire by Arthur; Cyrus to Alexander by Jacob Abbott (stay tuned for a review of that one on this blog…I’ve got it, too!). This weary piece of paper, obviously carried about in a pocket or purse, tells me the reader was serious about walking under the golden arches up to the Hall in the Grove on Commencement Day.  Seeing this much-creased, faithful witness to the unknown student’s fervor inspires me to be as faithful to my self-imposed discipline.