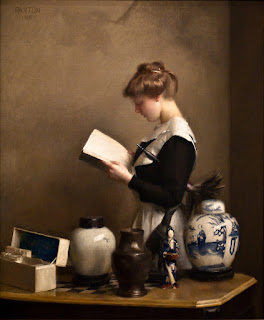 As I mentioned in my prior post, I wrote my English Comp ‘Get Out of Jail Free’ essay on the rock-solid theme: Why We Should Study the Classics. I assume I did okay, as I was excused from Freshman English. Mrs. Briggs, my incredibly staunch Classics-loving AP English teacher, would have been proud—she managed to drill into my head the absolute necessity of a classical education. Without it, she warned direly, we would not be able to communicate with other educated (aka civilized) Americans. We would be considered backwards dolts, fit only for menial labor and would spend the rest of our lives excitedly thumbing through (but not purchasing!) impulse-buy magazines at the grocery store. We would never find a worthy mate, be unable to vote intelligently, and in fact, should probably be neutered so we wouldn’t produce more idiots like ourselves. (I told you she was staunch.)
I blithely adhered to her dictums and continued in the same vein as I scaled the heady heights of greater knowledge. Staying in that lane was easy; my tiny, conservative Pennsylvania college profs had all quaffed from the same stream. In order to qualify as a truly educated American, you needed to master the central core of wisdom, which was outlined helpfully by centuries of English prep schools and transplanted here by the aristocratic, elitist patriarchy. Fluency in that lingua franca assured your place in legitimate society. Enter Chautauqua, the first serious attempt to raise the standard of education for those least likely to have dreamed they’d ever approach that altar.
Do I still believe this? Absolutely not. The only thing a classics education does now is separate the student from the masses, not build a bridge. Unless you’re planning to teach the classics (the academic equivalent of working in a buggy whip factory), there’s simply no point in it—at this point in American history, the classics are for recreational use only.
Mrs. Briggs used to lecture us that we were learning a common language that would enable us to enter a rarified world of opportunity and camaraderie with the finest minds of the ages. And, in a way, that’s still true. I routinely weep over the elegant turns-of-phrases I encounter in Isabella (Pansy) Alden’s works; the nobility of her heroes, the thoughtful story arcs that bring scripture into the everyday life in a beautiful way. But, that ship sailed a few decades ago and for my money, it’s never coming back.
When a society is gleefully content with the shattered English language used in texting, tweeting, snapchatting, and swaps emojis for an expression of one’s feelings, a meandering syntax doesn’t stand a chance. With the bathwater of cursive, school prayer, rote learning of uplifting texts (Scriptural and otherwise), we often throw out the baby of restraint, nobility, discretion, politeness, and grace. Everyone is up in everyone’s grill. Wildly jiving to your earbud tunes on street-corners while you wait for the bus? No problem, no one will bat an eye. Boarding a plane in your pajamas (and you’re not 3 years old)? No worries, the only folks dressed for travel anymore are the elderly and the stews. Your emails are patrolled by spellcheck; your calls are robot-generated.
So, why am I studying a year’s worth of 19th century texts? I want to catch a glimpse of what they knew, this generation that could do long division in their heads, memorize the lists of the conquering Roman Caesars, and knew who Jeroboam was. I want to believe that if I stood at an “at home” evening with a CLSC-trained chambermaid, I might be able to hold my own.

“I give you sound learning; so do not forsake my teaching.” Job 4:2