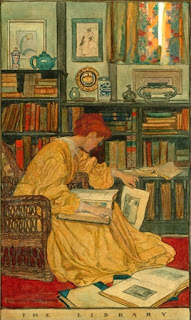 The historic CLSC kickoff, “Reading Day,” is October 1 (aka “Bryant Day,” celebrating American romantic poet and literary lion William Cullen Bryant’s support for the premiere CLSC of 1878), but last year, the reading list was announced in late August. So, I feel somewhat excused in setting my own inaugural date for commencing my own reading—which is right now.


I’m starting my year of 19th C/21st C crossover literary exploration (see my first post for more details on this little project) with the book that started it all for me, Isabella “Pansy” Alden’s wonderful 1881 novel, The Hall in the Grove. This riveting, beautifully written page-turner was chosen for the CLSC Class of 1881-2 booklist—quite a high honor, given the limited number of choices and the rigorous selection process. The Hall in the Grove lovingly and captivatingly describes the elevating, ennobling effects of Christ-centered higher education in the lives of several disparate characters who gather around the lamp of learning and light of Christ’s love.


The book opens in a tidy living room where we encounter Mrs. Fenton, mourning that her limited schooling will soon build a wall between her intelligent, better-educated 14-year-old son and herself. The crisis comes when young Robert asks when a certain Roman general rebuilt a wall (Brava, Isabella!) with no real expectation that Mother can help him. She unexpectedly finds an answer to her worries in the form of a small pink CLSC book at her friend Mrs. Chester’s house, property of visiting Chautauquan booster Katie Wells. The light begins to dawn for Mrs. Fenton; she needs a CLSC in her town!


It’s also at Mrs. Chester’s house we meet my favorite character Caroline Raynor, deft-handed, gray-eyed maid-of-all-work: she’s studying the CLSC booklist as her meager means and minimal leisure permit. We meet “the Butler girls” next, two featherheaded young women and their equally witless, dandified brother, Jack. Mrs. Fenton urges them to help her launch a local CLSC, but they regard literary clubs as the apex of all that is dull, dreadful, and dreary. (All these folks show up again, if you’re keeping score.)


Somewhat daunted, Mrs. Fenton forms her modest circle with her own family and Caroline. Not for long, thanks to the Rev. Gilbert Monteith, DD, eminent professor, linguist, preacher/teacher, scientific man, well-traveled, deeply cultured…and a hometown hero. He asks to join her circle and invite some friends. Stunned and delighted, Mrs. Fenton eagerly consents. Enter our final major characters: The Ward boys—Jim and Joe—and their buddy, Paul Adams. Pansy trots out scathingly subtle Victorian insults for these boys, noting their downhill progress towards being “common street loungers and loafers.” But even while making her readers’ lips curl in disgust, Isabella knows how to evoke sympathy. We learn the Ward brothers are motherless; Paul, fatherless. They all receive invitations to Mrs. Fenton’s parlor for the first CLSC gathering; the boys’ from Mrs. Fenton (who worries about their influence over her son) and Paul’s from Rev Monteith, who knew Paul’s father and wishes to save the son of his boyhoodfriend. We’re introduced to Paul’s surprising stubborn streak—once he makes a decision, it’s done. He’s going and by golly, so are the Ward boys. What kind of mischief are they up to?  Will Mrs. Fenton’s first CLSC meeting be wrecked upon the shoals of Victorian class war?


It’s fascinating to watch the delicacy with which Pansy’s crusading characters navigate the quagmire of the rigid 19th century class system. They reach into that murky world, holding out a hand of help and love, but somehow remain untouched. Pansy attributes it to Christ’s protecting and keeping power; as they are doing His work, He allows them to move among these social lepers—drunkards, loose women, the desperately poor—without besmirching their innocence or compromising their characters. While the upper crust snobs in Pany’s works fret that lower class folks are venturing dangerously outside their proper spheres, her Christ-following heroes and heroines extend God’s grace to everyone in their path, keeping each divine appointment with grace and graciousness.


“For we are his workmanship, created in Christ Jesus unto good works, which God hath before ordained that we should walk in them.” Ephesians 2:10
Posted by Karen at 11:50 AM