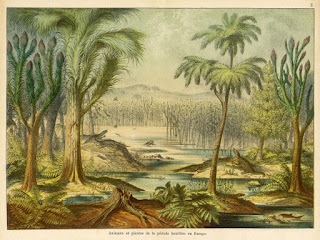 Didn’t you assume all Victorian Bible-believing Christians were anti-Darwin? I sure did, until I read the modest “First Lessons in Geology” by Alpheus Spring Packard Jr (with a name like that, Dad had the nerve to name his kid the same?). Packard (who prudently uses A.S. Packard Jr as his penname) was the professor of zoology and geology at Rhode Island’s Brown University and this limp, well-thumbed 1882 Chautauqua text was designed to accompany their Scientific Diagrams Series No 1 (Geology). Since I don’t have said diagrams, I must be content with imagining the soggy prehistoric shores as described by Packard in vivid detail.
I picture this chap in jodhpurs and a pith helmet, pickax at the ready, tramping through swampy fields and clambering over rocky mountainsides. He occasionally shares highlights of his personal adventures of climbing volcanoes, wading through ferny forests, and spelunking for fossils in the eastern US. These insights are either to reassure the young reader that he’s legit or to interject a note of personality in a teeming morass of scientific prose.
As far as I can tell, Packard just assumes that anyone with even a modest amount of brains can tell from the evidence that the earth is zillions of years old—Professor Packard would find the current conservative adherence to a 6-thousand-year-old Earth model to be hooey on a Jurassic scale.  One interesting feature is the emphasis on America—chapter headers call out “American During the Silurian Period” and he lovingly details American-grown prehistoric flora and fauna, like wooly mammoth herds frolicking along while antediluvian urchins gaped in wonder.
This quasi-Darwinian tribute text surprisingly and routinely combines creation and evolution, without making a clear distinction or even much of a fuss. His prose is restrained by Victorian standards, but there are the era’s signature flourishes, word pictures that unfurl like delicate Triassic ferns: “It is so simple an agent as running water rather than volcanic upheavals, which has, late in the world’s history, changed the face of nature, and adorned the earth with carved work, combining grandeur and sublimity with a delicacy and beauty of finish which elevates and informs the soul of man with the loftiest and finest feelings.” (pg 20). Another favorite of mine: “…there swam schools of smaller, slighter ganoid fishes, whose silvery chased and fretted plates of enamel gleamed in the bright clear waters lit up by the torrid rays of a Devonian sun.” (pg 81)
Packard presents his scenarios with a fait accompli flair and his conclusion tidies up all the loose ends and perhaps tries to assuage the fears of the Sunday School crowd: “Such, then, is the story of creation. And when we contemplate the creative or evolutional force which is immanent in nature, who can logically deny that here we are dealing with the evidences of the existence of an all-pervading and all-wise Intelligence outside of the material world, the Origin and Creator of all things?” (pg 127)
I wonder…is it significant that he concludes his work with a question mark?


In the beginning God created the heavens and the earth. Now the earth was formless and empty, darkness was over the surface of the deep, and the Spirit of God was hovering over the waters.” Genesis 1: 1,2
Posted by Karen at 1:20 PM